We have had a fantastic level of interest from those wanting to take part in our Strictly! Musical Fundraiser.

Groups of 8 to 10 (from a variety of backgrounds) will perform an excerpt from a musical, and will compete on the night for a sum of money that can be donated to a charity of one’s choice. There will be a panel of judges and there will also be voting on the night.

Professional training will be provided for 6-8 weeks in advance by Alicia Grills Grant and Rosemary Watson, the same people who previously choreographed our last Strictly Come Dancing event. Strictly! Musical promises to be another great event-this time it’s not just dancing but singing and acting too. It will be a professionally run event, for people who want to have fun and learn new skills and at the same time support the school and a chosen charity.

Entry Fee is €75 per person. There will be an information evening here in the school on January 14th. We then intend to have a launch night on January 23rd.

We are delighted with the response to date and we will be starting the new year with Strictly! fever. 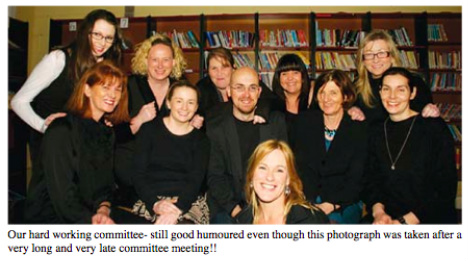 We have a very active Fundraising Committee within the school consisting of both Staff and Parents.

They have achieved much in recent years, with the 2013 Strictly Come Dancing event amongst their greatest success to date. They have become the ultimate event management organisers. To them, no task is too daunting, everything is possible and they won't stop until Scoil an Linbh Íosa has reached it's full potential.

The Fundraising Committee has worked tirelessly with the Parents and the wider community to help raise funds for the building of our amazing new building which is to house our Assisted Learning Classes. This extension opened in March 2014.

As well as the Strictly Event, the Fundraising Committee has also organised Family Fun Days, Christmas Craft Fairs and a Christmas Movie Night. If you would like to be a part of this dynamic team, or have an idea for a fundraising event, please contact the office.